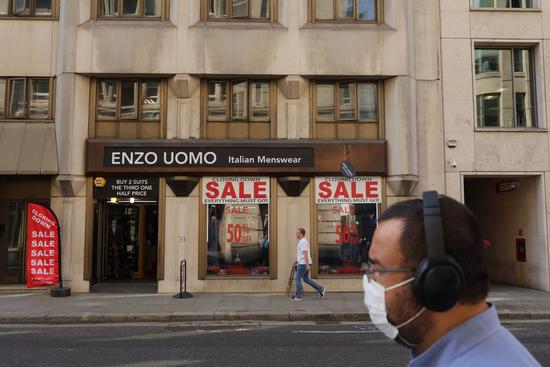 People walk past a clothing store in London, Britain, on Sept. 16, 2020. (Photo by Tim Ireland/Xinhua)

Britain could face a third wave of coronavirus and lockdown restrictions will not solve the problem, a British government scientific adviser warned Sunday.

Professor Mark Woolhouse, a member of the Scientific Advisory Group for Emergencies (SAGE), said on BBC One’s Andrew Marr Show that a third wave of COVID-19 was “entirely possible”.

The SAGE is a British governmental advisory body that advises central government in emergencies. It is usually chaired by the country’s chief scientific adviser.

Woolhouse, an Edinburgh University professor whose warnings came as Britain is dealing with rising coronavirus infections, said “mass testing” could be one of few alternatives to a vaccine if the country is to avoid a third spike.

The professor also revealed the British government “basically” did not model any response other than a lockdown in March, “and that is a worry”, the London-based Evening Standard newspaper reported.

Britain’s initial lockdown had been an “unproven intervention,” he said.

“There isn’t a proven scientific basis for any of this,” he said, “when we introduced lockdown in the first instance that was an unproven intervention.”

He made the remarks after British Prime Minister Boris Johnson introduced a raft of new restrictions, including a 10:00 p.m. (2100 GMT) curfew on hospitality venues in England, to tackle Britain’s “inevitable” second wave of coronavirus, with surging case rates plunging 17 million Britons into local lockdown, said the newspaper.

Citing the case of Sweden, which has avoided a high cases and death toll despite having no lockdown with minimal restrictions, to back his argument, Woolhouse said, “it is possible to turn an epidemic around without a strictly enforced lockdown.”

“What Sweden has emphasized and the epidemiologists emphasized is the importance of sustainability,” he said during the Andrew Marr show. “We are in this for the long-term and the measures have to be ones we can live with.”

However, British Culture Secretary Oliver Dowden insisted Sunday that there was “definitely science” behind the new 10:00 p.m. (2100 GMT) curfew on hospitality venues.

Speaking to the Andrew Marr Show, Dowden said “we are reducing the closing times to stop people staying later and drinking…And the point about all of this is that everyone has their part to play.”

“If we all play by the rules, we can ensure that there are not further, more draconian restrictions,” he said.

On Saturday, London police were forced to break up an anti-lockdown protest in the central part of the British capital after demonstrators failed to socially distance themselves as thousands of people turned out for the rally.

Meanwhile, London residents once again appeared to get around the new 10:00 p.m. (2100 GMT) curfew by moving parties from pubs to streets on Saturday night, the Evening Standard newspaper reported.

The blanket restriction, which kicked off on Thursday, is enforceable by law and pubs and restaurants can lose their licence for ignoring it.

Revellers gathered in Leicester Square in central London — apparently with little social distancing — late on Saturday to keep the festivities going, to the dismay of many onlookers.

In one video, a group of revellers were seen dancing and singing along as a man played a drum kit outside in the square, the newspaper said.

London is being placed on the national COVID-19 “watchlist” as an area of high concern “because of a spike in cases and hospital admissions”.

Advisors of the British government had warned the capital’s R rate, which refers to the number of people that an infected individual goes on to infect, may now be as high as 1.5 — the same level seen in the North West, North East and the Midlands, which have all been stung by additional COVID-19 measures, the Daily Mail newspaper reported.

“The near collapse of test and trace and the resurgence of the virus mean new measures to slow its spread were absolutely necessary,” he said. “Testing capacity was diverted away from London in the last two weeks to other national hot spots and weekly testing numbers are now down 43 percent in the capital since mid-August.”

The decision to make London an area of concern would improve access to tests, effectively putting it higher up the queue. The number of extra cases and rising hospital admissions were both key factors in the decision to put the capital on the watchlist, local media reported.

Khan’s remarks came at a time when countries, such as Britain, China, Russia and the United States, are racing against time to develop coronavirus vaccines.