Valtteri Bottas’ storming pole position for the Eifel GP has sent a title message to Lewis Hamilton, according to Sky F1’s Nico Rosberg – who has urged the Finn to take advantage of his former team-mate’s “weakness”.

Bottas ended Hamilton’s run of five consecutive F1 poles by outpacing the championship leader, and Max Verstappen, by two-tenths of a second with his final lap of a competitive qualifying at the Nubrurgring on Saturday.

His strong performance comes on the back of a dominant Russian GP victory which cut Hamilton’s title lead to 44 points, and Rosberg, the 2016 world champion who Bottas replaced at Mercedes, was impressed.

“That lap from Bottas out there was fantastic,” said Rosberg. “I looked it at and it was like, perfect. And under all that pressure!

“That’s exactly the message he needs to send Lewis’ way: ‘This is not over yet, I’m still in the championship fight’.

“If he can continue that tomorrow [in the race], that would be great.” 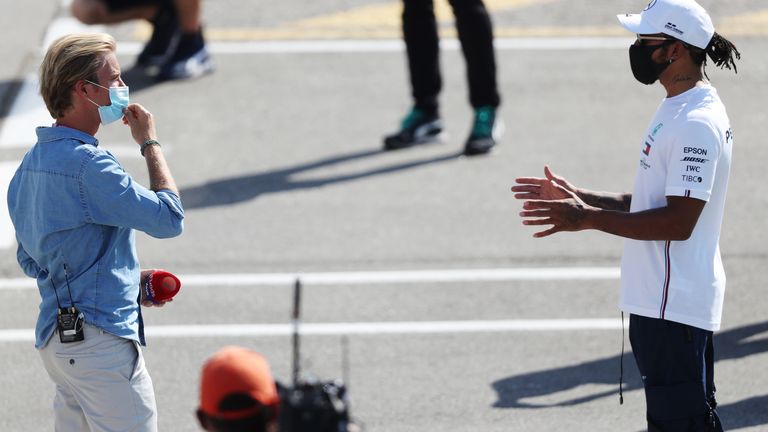 “Sometimes he can lose his momentum and he can dip down, and he’ll stay down for a couple of races.”

Asked if Hamilton was taking the negativity from Russia into this weekend’s race, Rosberg explained: “Exactly, and that’s the weakness Lewis has.

“Sometimes he can lose his momentum and he can dip down, and he’ll stay down for a couple of races.”

Rosberg, who partnered Hamilton for four years at Mercedes and had fierce, and often controversial title battles in 2014, 2015 and 2016, added: “You have to try and keep him down there and then also maximise your own results in the meantime.

“So if Lewis really is in this period now – which we don’t know yet, we’ll see how tomorrow goes – then Valtteri needs to be winning and maximise those points because it’s the only opportunity you get and the only chance you have to compete with Lewis.”

Valtteri Bottas: “It’s such a nice feeling when you get it on the last lap, with the last chance. The last lap in Q3 was spot on, just what I was needed. It’s been pretty tricky this weekend.

“The only goal for tomorrow [is to win]. Hopefully I can get a good start.”

Lewis Hamilton: “I’m sure when I look at the data there will be plenty of time [missed], he’s two-tenths ahead. Valtteri did a great job so congrats to him.

“There’s a lot to play for tomorrow so I need to get my head down.”

Every Premier League game Arsenal, Chelsea and Tottenham fans will be able to attend – Football.London